What is a world without language? Without spoken or written language, signs, gestures and sounds? It would be an uncivilized society filled with violence, misunderstandings and distrust among its citizens. Octavia Butler’s short story, “Speech Sounds” shows a society without language and throughout it is apparent just how important language is to the continuation of society and culture.

“Speech Sounds” is a short story that took place in a dystopian world where a pandemic rendered all its citizens speechless – literally. There was no written words or even understanding, no language – spoken or sign, nothing. They were incapable of understanding one another. Their forms of communication were gestures, pointing, and grunts. Butler writes of the language in “Speech Sounds” by saying, “Loss of verbal language had spawned a whole new set of obscene gestures (Butler 4). Without any language, violence often ensued. On a rare bus ride, the main character, Rye, witnessed a fight between bus passengers. A bearded man, who was later to be named Obsidian, came to help diffuse the problem. Without language, though, his efforts were almost futile. “The bearded man stepped back and watched the driver gesture threateningly, watched him shout in wordless anger (Butler 2).” Obsidian and Rye were finally able to get away from the situation. They traveled together and ran into another problem that ended up costing Obsidian his life. Rye was distraught at losing the only person she felt she had. Michelle Green wrote an article discussing “Speech Sounds” and said, “Butler indicates that deprived of the ability to share a primary language, individuals will leave off building their cities and wander into isolation (Green 167).” Many of the citizens felt this way all because of no language. The only thing in common between them that they shared was as Green said, “Violence is a universal language….(Green 168)”. Rye finally overcame her isolation when she found some children who could speak. Her enthusiasm to find another human being who could speak and who she could understand was unfathomable. She even discovered that she too could talk and comprehend everything. Butler had written this short story without any dialogue up until the end. She ends the story perfectly with Rye now able to speak. “I’m Valerie Rye,” she said, savoring the words. “It’s all right for you to talk to me (Butler 12)” Indeed it was, Valerie, it was more than alright to talk. 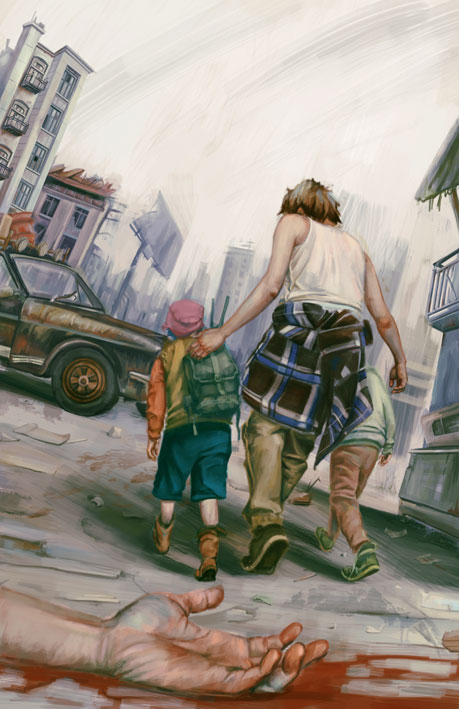 An artists interpretation of the last section of “Speech Sounds”

Language is powerful. It’s what sets us apart from animals. Octavia Butler showed us just how powerful it is by writing about a world without it. Ruth Salvaggio said in a literature review, “In Speech Sounds, Butler again shows the power of language, but this time by painting a picture of a world doomed of the most basic of forms of speech – sounds and utterances (Salvaggio 39)” Language is so much more that just utterances. Society cannot function on just utterances.  Language brings so much to society. It establishes the present, holds the future and knows the past. Individuality is expressed through various modes of communication and expressions. Opinions and freedom of speech is perhaps this country’s at least biggest right. Without it, people just don’t feel as free. This simple thing that many take for granted is the very thing that brings forth understanding, knowledge, emotions and more. It helps spread culture to others, especially future generations. Walt Wolfram of the Linguistics Society of America states, “Language is one of the most powerful emblems of social behavior (Wolfram 1)”. Unfortunately with all this power , comes negativity. Language can be hurtful – emotionally, psychologically and even physically. Octavia Butler writes in the Afterword of “Speech Sounds” about the physical part of language “… wondering whether the human species would ever grow up enough to learn to communicate without using fists of one kind or another (Butler 13)”.

A world with language in it is the right kind. Society can’t function in a “Speech Sounds” type of world. It spells disaster with a capital ‘D’. Living in a world with language, although it has a few cons, is the only way to live.

For further reading – a neuro view on Life without Language